Today was the final day of our time in Somotillo.  The day started with a devotion that dealt with us carrying the word, to not only the people on Somotillo, but also to the people that we come in contact with everyday at our jobs or our everyday life.  It makes you think about the fact that we will travel 1500 miles to share the word of Jesus with people but we wont walk five feet to the cubicle, desk, or house next to ours.  So what is important to us is it people knowing that we go on missions trips or is it trying to save the lost?
Next in our day, we were divided into two groups. One group went and worked on the clinic where they have been trying to correct the walls, pipes, and everything else due to regulation changes by the government.  The men and women that have worked at the clinic have voiced that the devil has tried over and over to foil their plans and advances, but God has given them the strength, and more importantly the patience to endure. Today arriving back at Casa DE Shelly (our compound) they were upbeat and pleased with their progress.
The second group went to the Escula de Pascuala. We were we greeted by close to 60 kids at a school that was a two room concrete building that apparently livestock stay in from time to time. In one room the Doctor saw close to 25 patients passing out antibiotics, antiworm medicine, etc… In the other room the Gospel was presented with a story of Joshua and the power of God. After the story bracelets, coloring books, other crafts were passed out, until we broke into two further groups of playing soccer and singing songs.
After lunch we went to the Village of La Fragua. The doctor again traveled with us and saw close to 40 people with a wide array of ailments. The people were feed Manna Stew (which consist chicken, corn, beans, and rice) and another group played soccer. While playing soccer we presented the gospel to a group of 12 men whose ages ranged from 15 to 65. The group was very receptive and several raised their hands telling us they understood what was said and accepted Christ.
On our way back to Casa de Shelly, we stopped and hiking the mountain of prayer.  On top of the mountain was a beautiful panoramic view of the Nicaraguan valley that is completely surrounded by mountains, including one volcano. It was a reminder of how creative and powerful God is and if we trust him we can never go wrong.  It was an amazing ending to an amazing week. 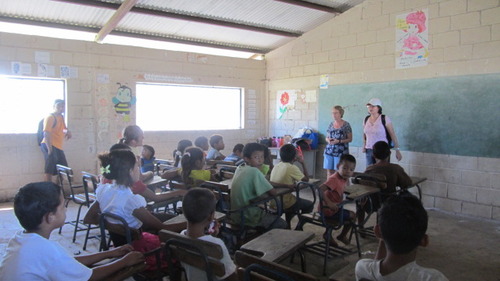 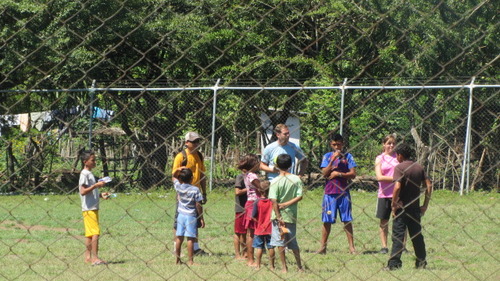 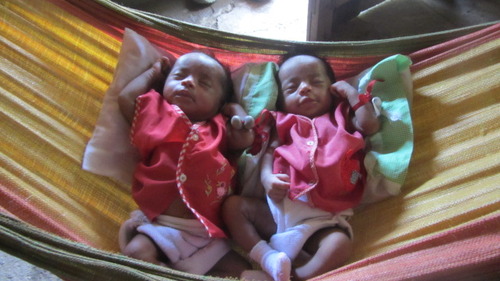