Another day on the mission field and today, God showed up in a big way!  The day began with prayer and Bible study among the team and we prayed for God's blessings on our efforts for the day.  We traveled to the market to purchase supplies to make stew in one of the villages and candy for the villagers.  Once we arrived back at Casa de Shelly, we prepared the ingredients for the stew and packed bags full of Christmas toys to be given to the children in La Flor.  In addition to the toys, we had three cases of shoes that were to be distributed to the children.  Once all of our preparations were complete, we headed out to be the hands and feet of Jesus.
En route to La Flor, we distributed candy and small toys to the villagers along the way.  When we arrived, the village was in the middle of their church service so, with the permission of their Pastor, we joined them.  Hearing of our arrival, children began arriving at the church anxious to see what we might have for them.  We shared the Word of God and the plan of salvation with the children and their parents and many prayed and asked Christ into their lives.  After sharing the gospel, we began to fit the children with their new shoes and distributed their Christmas goodies!  What a blessing to see their faces light up and hear their laughter! After we had given out all of the shoes and toys, we headed back to Casa de Shelly to replenish our supplies and grab some lunch.  Of course, when we arrived back at the house, we had the most delicious chicken tacos waiting for us.  Still excited from the morning's mission, we quickly ate and began to reload the truck with toys, candy and the ingredients for our stew.  Once we had all of the supplies in place, we headed out once again.
We drove several miles down a dirt road to the village of Laredo.  Secluded and far from town, the people of this village were more than happy to see us coming!  Upon arrival, we immediately began to engage the children with games, jump rope and sidewalk chalk.  As many of the team played with the children, others were beginning to prepare the stew.  It's hard to imagine the significance of the stew ~ people who haven't had fresh vegetables or meat for a very long time seemed to understand it clearly.  As the stew began to boil, the children and their parents ran into their homes and quickly returned with anything that they could carry their stew in ~ they knew it was time to eat!  The children formed two lines and waited patiently until it was their turn to receive their stew.  What a blessing to know that each and every person in Laredo will go to be tonight with a full tummy!
When we headed out to Laredo this afternoon, we had no way of knowing how many folks would turn out with their bowls for some stew but God knew exactly how much we needed and every bowl was filled.  When the last bowl was pushed forward for a ladle of stew, the pot was empty!  Clearly, God showed up when we needed him most and provided just what we needed for the people of Laredo.  Thank you Lord for your love and goodness! 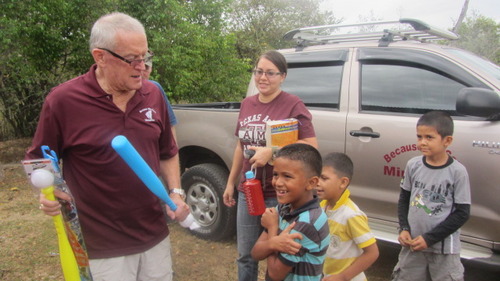 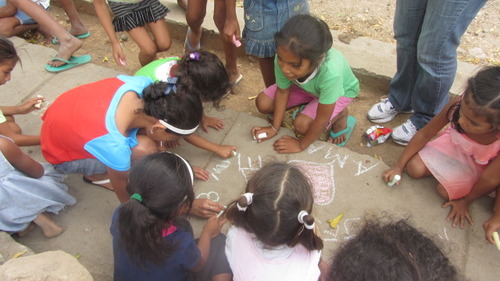