Our group first went to a special needs school. Immediately we recognized the bad physical condition of the school and the lack of funds they probably have to work with. While it is hard to live with a physical or mental handicap, the condition only magnified in a third world country. Little distinction appeared to be made with those with physical and mental disabilities as the blind, deaf and mentally handicapped appeared to be grouped together.

Our group spent time coloring, painting the girls’s fingernails and played ball with the boys. Our group then gave a brief presentation of the gospel story. While we don’t know how much many could comprehend, hopefully they could feel the love of Christ through the time we spent together.

Our second stop was at El Jicarito School. Again, the lack of money the teachers have to work with was very evident in this elementary school. Tattered books, old desks and the overall setting was humbling when compared to the schools our children attend. We again gave a presentation of the gospel and then spent a while playing soccer with the boys. The others in our group worked with the girls coloring and fingernail painting.

Finally we visited the village of Jinocuaito. Along the way, we were able to toss candy and clothing at children and adults that were along the roadside. Their poverty was evident when we saw old and young alike dash for items that were tossed in their direction. The community was very impoverished with dirt roads and poorly constructed homes. It was again humbling to see their smiles for a group that came to visit. We played soccer with the boys while others did the activities with the girls and smaller kids. We were then surprised to see that our guys were challenged to a game of soccer by the ladies of the village. They were very worthy opponents. We gave the gospel story and the passed out rice and protein packs to the residents as we left.

It was a blessing to see how God used us today. 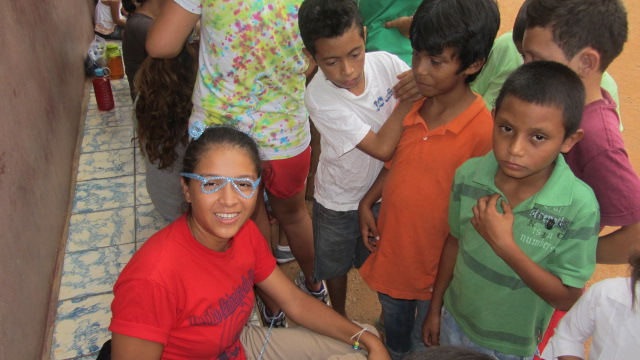