Archive for the NicaNews Category

Another Day on /Mission

Blessing from Somotillo Nicaragua…Coffee consumption underway as the BWCM team prepares for another day of KINGDOM BUILDING. Praying for safe travels today for part of our team that begins their journey back to the USA. Thank you LORD for those that will remain here one more day to continue distributing MannaFest bags and the GOSPEL…..#PRAYINGASWEPROCEED

Whoever brings blessing will be enriched,
and one who waters will himself be watered.

In just a few more weeks Because We Care Ministry will have a team in Somotillo Nicaragua preparing FOOD BAGS to be given out during the Christmas season. We need your prayers and support to feed hundreds of families in the Somotillo area. With a donation of $10.00 we can feed a family of 6 for a week. BWCM has been blessed so much this year that we will increase the food in each bag to provide enough food for at least 2 weeks. Please pray about getting you church or family involved in this feeding program.

Please pray for this opportunity and as GOD leads you can go to our web site (bwcm.org) and donate or you can send donations to BWCM, PO Box 14132, Roanoke VA 24038

Thank you for your PRAYERS and SUPPORT, Donald and Pamela

Proverbs 22:9 ESV
Whoever has a bountiful eye will be blessed, for he shares his bread with the poor.

Please help BWCM feed the hungry families of Nicaragua. By donating $10.00 you can feed a family of 6 for a week.

Please go to our web site…BWCM.org and donate or mail checks to Because We Care Ministry PO Box 14132, Roanoke, Va 24038

Proverbs 14:21. Whoever oppresses the poor shows contempt for their Maker, but whoever is kind to the needy honors God.

Please join us in providing food to families in Nicaragua during the Christmas season. Manna Fest bags will feed a family of 6 for a week. Please go to our web site…bwcm.org…and donate or you can mail checks to PO Box 14132 Roanoke, VA. 24038.

Be Blessed and THANK YOU FOR YOUR PRAYERS AND SUPPORT. Donald and Pamela

We still have room on our Nov. 30 mission team. If your interest please send us an email and we’ll everything going.

Blessings from Somotillo Nicaragua…….Praising GOD for all the blessings and provisions received this year for the families of Nicaragua. Today we are starting our, "MANNA FEST" for Christmas. Manna Fest is a feeding program we feature each year to provide food for families during the Christmas Season. Each bag provided will feed a family of 6 for a week. Please go to our web site (bwcm.org) and donate or mail checks to BWCM PO Box 14132, Roanoke, VA. 24038

We are blessed to have a team coming December 27th to pack and distribute the bags. Message us if you would like to join this team.

By His Grace, Donald and Pamela 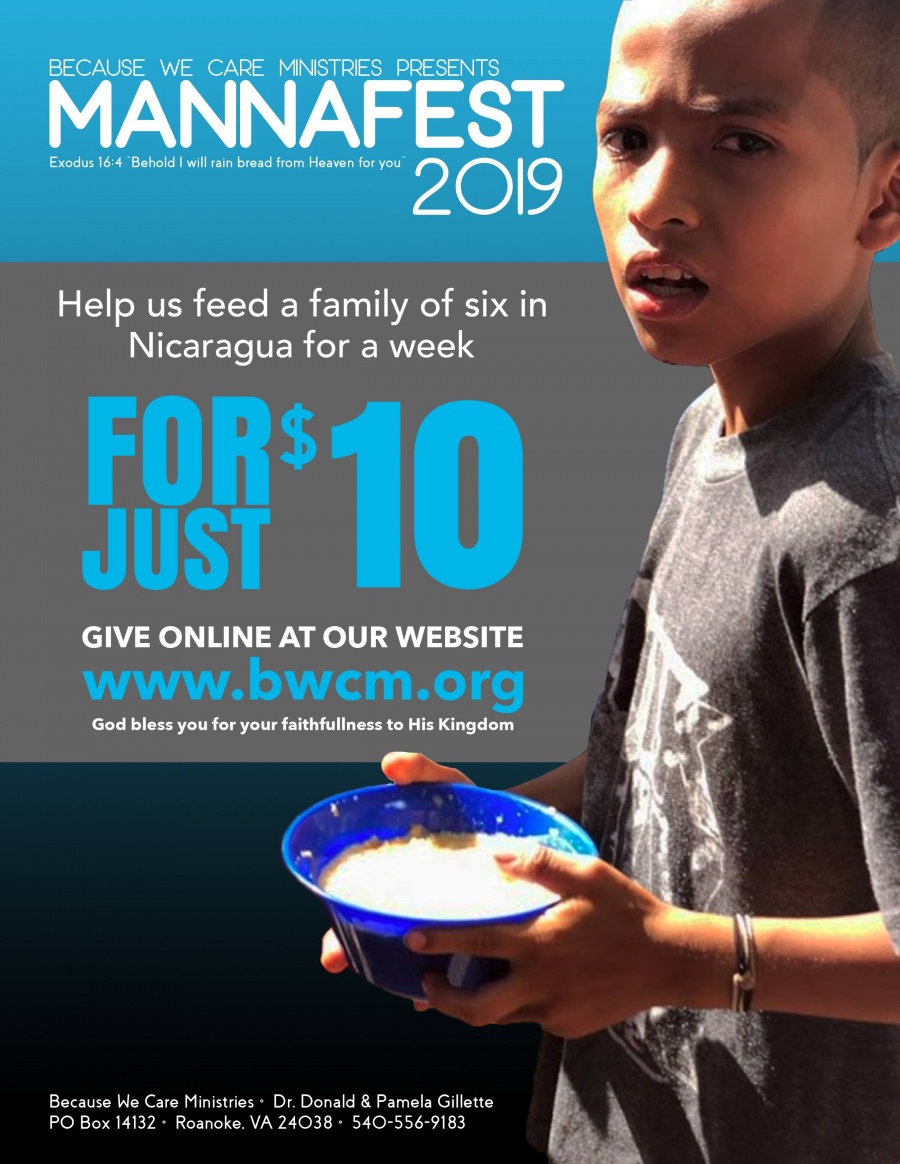 The former Kroger Cares program has been changed to the Kroger Community Rewards Program. Please register your Kroger Plus card at krogercommunityrewards.com. Follow the steps under "Sign Up Today" and choose Because We Care Ministry Roanoke as the organization you would like to support. BWCM will received cash rewards if you take the time to do this!!! Thanks so much.

I invite you to join us for a “Once in a Lifetime Experience” to see the very places where Jesus walked, taught and lived His earthly life. Come with us on a tour of the Bible Lands. The Bible will come alive for you. I would like to share this experience with you and encourage you to join me.

I am certain you will return filled with enthusiasm, gratitude and a renewed faith. “To walk in the footsteps of Jesus cannot be described. It can only be experienced.”

Complete the enrollment form and mail it to me today. I look forward to your companionship.

GOOD MORNING AND BLESSING…..This team is filling up fast, if you plan to go you should get your registration form in ASAP. Pam and I are excited about you joining us on an adventure of a life time. By His Grace, Donald and Pamela

I invite you to join us for a “Once in a Lifetime Experience” to see the very places where Jesus walked, taught and lived His earthly life. Come with us on a tour of the Bible Lands. The Bible will come alive for you. I would like to share this experience with you and encourage you to join me.

I am certain you will return filled with enthusiasm, gratitude and a renewed faith. “To walk in the footsteps of Jesus cannot be described. It can only be experienced.”

Complete the enrollment form and mail it to me today. I look forward to your companionship.

Are our short-term “missions” trips really helping the cause of missions?

This definition implies at the outset that missions is most effectively carried out by long-term missionaries.

By “short-term missions (STM) trip,” I mean a visit to a foreign country for the sake of missions, typically lasting no more than two or three weeks. I use that definition not because it’s sensible but because it’s been the description shared most widely in the church since the late 20th century. By the definition of missions above, though, “short-term” missions doesn’t actually exist — languages cannot be learned and cultures cannot be understood in a three-week visit. This does not necessarily mean that such short-term trips can’t support the cause of missions. The question is what role short-term trips can play in the church’s long-term goals among the nations?

Scripture is the first place we should look for insight on how to think about ministry models, especially when the stakes are as high as they are. We’re talking about thousands of trips, billions of dollars, and untold number of unreached souls.

The Long-Term Ministry of Encouragement

I have thought it necessary to send to you Epaphroditus my brother and fellow worker and fellow soldier, and your messenger and minister to my need … So receive him in the Lord with all joy, and honor such men, for he nearly died for the work of Christ, risking his life to complete what was lacking in your service to me.

The epistle to the Philippians includes a message of gratitude from a missionary (Paul) to one of his supporting churches for the supplies they sent via Epaphroditus, who is a great model for short-term work. Epaphroditus served the church and the cause of missions by being a messenger of the church’s love for Paul, and by being a minister to his emotional and physical needs (Philippians 2:25). His “short-term” efforts advanced the cause of missions by supporting the most effective means of missions — long-term missionaries.

There are several things we can learn by looking to Epaphroditus.

Testimonies of missionaries declare and personal experience confirms that Epaphroditus-type visitors can refresh and encourage discouraged long-termers who were almost ready to pack it up.

The Long-Term Ministry of Education

Though the goal of missions has not changed since the first century, the strategies have. Vocations, industries, and services have progressed and developed over the years.

Consider your own vocation or business. Have you ever had a team of 10–20 people come to your work place to help you do your job for a week? Perhaps some of you can think of a rare exception. But suppose that the team doesn’t speak the language of your colleagues or customers. Suppose they’re not from North America and know nothing of the culture. How helpful would that team be to you?

If such a visiting team of workers is not typical in vocations or industries in the United States, should we assume it would be helpful for missionaries?

More effective than doing the work for a couple weeks, short-term teams can minister by providing continuing vocational education (CVE). Many professions have seminars, conferences, or meetings where those in the particular field can learn from others in the same field. Most missionaries do not have geographic or financial access to this kind of targeted teaching. Because of the lack of expertise and resources in many missions settings, CVE trips can be beneficial even if the instructors are not industry experts — they simply have to be trained enough themselves to train others.

And this kind of vocational training is not necessarily limited to paid employment. For instance, there are conferences in the US to support parents who home-school their children. How encouraging do you suppose a visit by two Epaphroditus-type volunteers with expertise in education or academic assessment would be to a mom who home-schools her children out in the middle of the Sahara desert? If that focused, thoughtful visit leads to just one more year on the field, it could be worth far more than 52 one-week STMs for the cause of missions (and, by the way, a far more effective and efficient use of resources).

Missions is the process of reaching unreached peoples with the Gospel, which requires intense language-learning, cultural study, and relationship-building. Short-term missions, therefore, does not exist. All of our missions — however long we’re physically in the country — is long-term missions. Church resources should be invested in short-term trips as a way of supporting missionaries, not as a separate missions strategy.

One way to support missionaries is to send Epaphroditus-type ministers (EPM) to love and encourage them. Another is to supply specific ongoing vocational education for their areas of ministry at home and in the community (CVE).

We have developed a mission trip prayer journal to use during your trip. We encourage you to print this out and review before the trip, and then use as a journal during your trip.Download the PDF